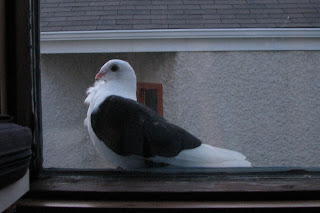 This past Saturday afternoon, I was reading Luke 1-2 as part of my regular devotional time with God, and I found myself freshly impacted by the story of Zechariah and Elizabeth. I always find it a bit startling as the angel Gabriel appears and says, "Do not be afraid, Zechariah; your prayer has been heard. Your wife Elizabeth will bear you a son..." (Luke 1:13). It's startling to me because I assume that Zechariah and Elizabeth had stopped praying that prayer a long time ago. Verse seven tells us that "Elizabeth was barren, and they were both well along in years." In other words, old -- too old to have kids. And then along comes this angel promising a son, with no reference to why this answer to their prayers had taken so long. To God, it seems, the time-delay is irrelevant. What matters is God's timing, and this is God's time for the answer. But to us, who sometimes struggle with unanswered prayers in our lives, such lengthy seasons of unanswered prayer can be difficult, and I expect Zechariah and Elizabeth must have felt that way. Judging by what Gabriel said to them -- "Your prayer has been heard" -- they may have wondered if God had even been listening to their prayers. And I know from personal experience that it's also a temptation to wonder if you've prayed enough -- maybe God hasn't healed Fiona because we haven't been persistent enough or haven't prayed with enough faith. Or maybe I'm just not good enough for God to bother with my prayers! It's amazing where your mind can go as heartfelt prayers remain unanswered. But this passage shows us how unanswered prayers can have very little to do with whether or not we're "good enough"! Verse six says of Zechariah and Elizabeth, "Both of them were upright in the sight of God, observing all the Lord's commandments and regulations blamelessly." That's high praise for a couple that happened to be barren and might have wondered if God was displeased with them. But in fact, God was very pleased with them, and He had heard their prayers, and was now answering them according to His timetable. But as I finished reading Luke 1-2, I found myself asking God, "Have you heard my prayers, Lord? My prayers for Fiona?"

Later that day, in the early evening, I walked into our bedroom, and there on the window sill of the window just beside Fiona's dialysis machine, was what appeared to be a dove (see picture above). I stopped in my tracks and called Fiona, and the kids came in closely after her. We were all amazed. We had never seen a pigeon or a dove in our neighbourhood before, let alone one with such striking colour on its wings. The dove was aware of us in the room, but didn't seem disturbed. It didn't even mind as we edged closer and closer to the window. Fiona and the kids eventually got right up to the glass in order to see its features more closely, and it just looked at them, unconcerned at their proximity.

Later, at bedtime, it was still there. We moved to and fro getting ready for bed, and it remained on the sill, calmly watching us. And even when Fiona pulled down the blind on that window, it wasn't frightened away. In fact, it stayed there all through the night. Every so often, Fiona would wake up and would hear its little feet pitter-pattering on the sill and as she would peek out at it, the dove would casually turn and look at her. And in the morning, when we eventually opened the blind again, there it was, still keeping us company. And just minutes before we left for church, I went back up to our room to get something, and it was no longer on the sill. But as I looked through the window from across our room, I could see the dove sitting on our neighbour's roof still staring back at me. That was the last I saw of it.

Later that day, I wondered again about our little visitor, and I wondered if God had sent that bird. I then thought that it would seem more like a God-thing if I happened to read about a dove in my regular Bible-reading schedule. Unfortunately, I didn't give that another thought and didn't even get around to reading my Bible that day!

The next morning, I opened to Luke 3 as I was reading my Bible. I was oblivious to what I was about to read, and I wasn't even considering what had happened on Saturday as I began reading about John the Baptist. But as I got to Jesus' baptism, and the dove came fluttering down from heaven, my head shot up and I stared out at the sky for what seemed a long time. What just happened, I wondered. And as I connected the dots from the Father's affirmation of His Son at His baptism to the dove on Fiona's window sill to the story of Zechariah and Elizabeth and all their supposed struggles with years of unanswered prayer, I was in awe. It seemed to me that God was saying, "Yes, I have heard your prayers." And if that assuring message is even more like the one delivered to Zechariah, that could mean He also intends to answer our prayers.

I'm no closer to knowing what God will do or when He will do it, but it does seem to me that He sent us a visitor so that we would know He is with us, and that He hears and cares about the many prayers we've prayed for Fiona. I'd like to believe that dove was also meant to assure us that He will answer our prayers for healing, but I need to leave that with God, trusting that whatever He does, whenever He does it, is good and acceptable and perfect. And I thank God for the beautiful way in which He sent us such a message!

I'm so glad you posted this story. I'm sure it will encourage many as it encouraged me.

Thanks Kathy. And I know that God has heard your guys' prayers too, and that a part of His answer will soon be here in Canada with you! That'll be an exciting day!

REALLY great talking with you today, Ken. I have more to continue with by personal email tomorrow.

This, this is a true, meaningful connection. Yes, He hears and, yes, He knew how meaningful this would be for you, that it would communicate assurance.

Thanks Larry. And yes, assurance in this area is something I can greatly use sometimes. It's not that I need to be sure of a certain outcome. I just value a reminder from God once in awhile, confirming that He hasn't lost track of us in all He has to do in this world!