God is so awesome!

Ever since I first heard Louie Giglio speak about the heavens revealing the otherness of God, I've been fascinated by images of the universe around us. That's why I've placed an "Astronomy Photo of the Day" in the left column of my blog. God is so huge and I am so small, and the more I realize that, the more I'll respond with proper humility before God in the midst of life's challenges. When facing such times, why would I ever argue with a God who is so wondrously great that by the word of His mouth, He filled a universe with billions of galaxies (the Hubble telescope images suggest 125 billion), each one filled with billions of stars, while also loving me enough to choose me before the foundations of this planet were even in place (Ephesians 1:4)? He is God, and there is simply no one like Him (Isaiah 45:5-7)!

I've resorted to using photos of galaxies as wallpaper on my computers just to keep this perspective fresh on my mind. I used to have the Barred Spiral Galaxy on my home computer screen. Take a look... 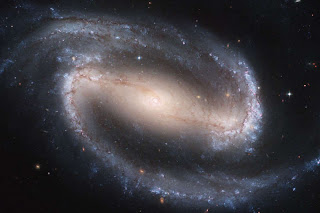 It's a galaxy about 69 million light years away from earth, and is over 100,000 light years wide, meaning it would take a person 69 million years traveling at 186,000 miles per second (the speed of light) to get to it, and then another mere 100,000 years to travel across it! The sheer scale of such an object is mind-boggling!

At the office, I presently have the Sombrero Galaxy on my computer screen. It's only 28 million light years away, and a mere 60,000 light years wide... 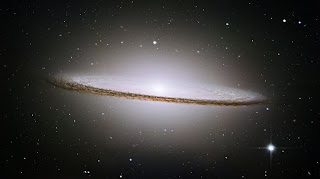 But even though it may only be half the size of the Barred Spiral Galaxy, it's estimated to contain nearly 2,000 globular clusters (spherically shaped collections of up to a million old stars held together by gravity), which is 10 times more than our humble Milky Way contains!

And as I think of how our sun is considered a small to medium sized star, and that there are billions of stars in each of the billions of galaxies, and that God knows exactly how many there are and knows them all by name (Psalm 147:4), I'm humbled at how extremely small I

How small? A wonder 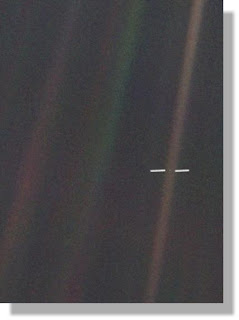 ful image taken by Voyager 1 in 1990 while it was on its way out of our solar system, more than 4 billion miles away from earth, gives a very real sense of our smallness. As Voyager 1 grew increasingly distant, Ground Control on Earth commanded it to turn around and take some pictures of our solar system. From that vast distance, in one of the pictures, Earth can be seen as an infinitesimal point of light visible in a ray of sunlight (enlarged in the image to the right, or click on the image to the left to enlarge it).

As the famous astronomist Carl Sagan later said, "That's here. That's home. That's us." That little dot is where "everyone you ever heard of, every human being who ever lived, lived out their lives... every saint and sinner in the history of our species, lived there on a mote of dust, suspended in a sunbeam."

What's even more amazing about all this is that the same psalm that says that God knows all those billions of billions of stars by name (147:4) also says just one verse earlier that "He heals the brokenhearted and binds up their wounds (Psalm 147:3). What a contrast! A God who is great and awesome enough to create the entire universe condescends to bind up our wounds. Psalm 147 goes on with this contrast: "Great is our Lord, and abundant in power; His understanding is beyond measure. The Lord lifts up the humble; he casts the wicked to the ground" (Psalm 147:5-6). A God of infinite power gently lifting up those who humble themselves before Him. That gives me great reason to want to respond like Job and say, "Behold, I am of small account; what shall I answer You? I lay my hand on my mouth" (Job 40:4).

I like this Ken. I saw the video by Louis Giglio as well and I too was reminded of my place in this world...so small and yet so loved. Truly it is beyond my understanding and but I am so grateful.
Janine

Thanks for the comment Janine. Check out Psalm 147:3-4! The same God who "determines the number of stars" also reaches down and "heals the brokenhearted and binds up their wounds"! What a contrast. What a God!