A love for desert places

In the film Lawrence of Arabia, Lawrence is asked by a reporter why he loves the desert so much. Lawrence simply replied, "Because it's clean."

Having lived in a desert for a year, I understand that reply. There's a purity found in a place where the arid heat is so intense that no bacteria can thrive and where the push and pull of societal ills are as minimal as a desert's population.

But I'm not one to romanticize the desert. I had too many bad days there for that. As the real T.E. Lawrence wrote in the initial lines of his masterpiece, Seven Pillars of Wisdom, "Some of the evil of my tale may have been inherent in our circumstances. For years we lived anyhow with one another in the naked desert, under the indifferent heaven. By day the hot sun fermented us; and we were dizzied by the beating wind. At night we were stained by dew, and shamed into pettiness by the innumerable silences of stars." In other words, the desert may be clean, but it has a way of humbling those who enter it (as a couple of my own writings from the desert illustrate). 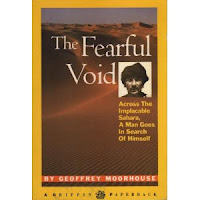 But though I'm no desert romantic, I do feel an attraction to desert places. My favourite quote regarding the desert is that of Geoffrey Moorhouse from his book The Fearful Void. He set out to cross the Sahara from west to east by camel and by foot, and the following description has always struck me as both a beautiful portrait as well as an insightful observation...

"Next day dawned cold and clear, and a new world lay endlessly ahead. ...we were confronted with a passage across what looked like an eternal plain. Its dimensions were only emphasized by the presence, low on distant horizons, of isolated peaks and tabletops of rock. These made for confident navigation, for they were marked on the chart, but their greatest effect was to provide such scale to the entire panorama as to reduce two men and four camels to their proper proportions in this towering and barren universe. We were insects creeping forward to a rim of the world that might never be reached, across pure and unbounded space in which we had no hope at all of encountering anything else that lived and could offer comfort by its presence. It was appalling; but, at the same time, it was exciting, with a spellbinding quality that penetrated even the dulling of the senses that it imposed.

"For over three months I had laboured across the Sahara, and there had been few moments when I had experienced the magnetism of the desert to which so many men before me had succumbed. But now, in its utmost desolation, I began at last to understand its attraction. It was the awful scale of the thing, the suggestion of virginity, the fusion of pure elements from the heavens above and the earth beneath which were untrammeled and untouched by anything contrived by man."