Fond memories of a man I never met, on this Day of Remembrance 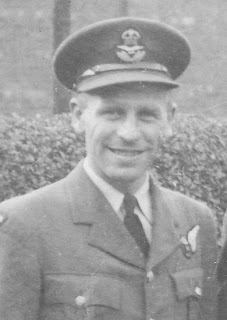 My son Nicholas is fondly named after a man I never met. I've long wished I had known him. Ever since I found a book of his poems on my Dad's bookshelf when I was a teen, I'd wished that my great-uncle Nick had survived the war and that I could have had many long talks with him.

He was my father's father's youngest brother. My father's uncle. My great-uncle. A pastor who had known him before my Uncle Nick went off to war said that Nick Peters had one of the most cheerful spirits he had ever had the privilege of meeting. He said that "he was an inspiration too, for he had inherited an idealism and a mystical quality of mind from his Mennonite ancestors that kept him pressing upward, always searching for the meaning of things, always trying to understand."

Born two months premature in Russia in 1915, great care had to be taken to help him simply survive his first year of life. One of his brothers said that the war years of 1918-1921 made a deep impression upon his young mind and ended up giving him a rather serious view of life from an early age. In 1925, when he was 10 years old, he and his family (including my grandfather) fled Russia, traveling by boxcar and steamship, and moved to Grande Pointe, Manitoba, Canada. Once he had grown up, he traveled to many parts of Canada, working in gold mines in B.C., coal mines in Alberta and selling Electrolux in Sudbury, Ontario. 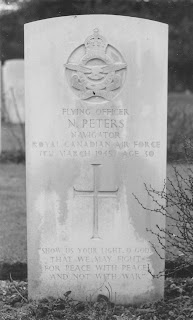 Eventually he volunteered for the Royal Canadian Air Force. He trained in Toronto in 1943 and was commissioned as Pilot Officer in May 1944. He 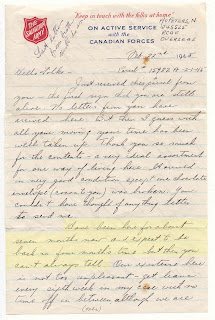 left for England in July 1944. Eventually promoted to Flying Officer, and serving as a navigator aboard a reconnaissance plane, his plane was mistakenly shot down by a Lancaster sometime on the night of March 7, 1945, a mere 2 months before Germany surrendered on May 8.

On February 22, 1945, Nicholas wrote what would be his last letter home. The highlighted portion on the left says, "Have been here for about seven months now and expect to be back in four month's time but then you can't always tell."

A few months earlier, just before embarking upon his first flying mission, he had written to his brother Isaac: "There comes a time in the life of every airman who caters to the blue, when he is facing the results of his training. My time has come... I felt someone of the immediate family ought to know. I chose you. If I am reported 'Missing' you will understand that most of the 'missing' turn up again... It amuses me to think back on the way [we once] viewed the world. Many things have passed since then. Much has taken place; more than we, in our present state, could comprehend. We have toiled, struggled, and played, and Life as a whole has been good."

Uncle Nick was a poet, and what he wrote inspired me as a reflective teenager who was searching for meaning myself. I was 15, sitting on our basement floor book in hand on the day that I discovered the poetry of Nicholas Peters. It was also the day I discovered that the man who wrote such wonderful verse had been killed in service to this country long before I'd have had a chance to meet him. The following poem was written by Nicholas Peters on September 22, 1939, just three weeks after the onset of the war in which my Uncle Nick would die.

The Wars we Make

I gaze into the world with sorrowing eyes
And see the wide-abounding fruits of hate.
We fight, we say, for peace, and find
The wars we make
To be a spring of hate and source of future war.
Is there no peace for man?
No hope that this accursed flow
Of blood may cease?
Is this our destiny: to kill and maim
For peace?
Or is the 'peace' we strive to gain
A thin, unholy masquerade
Which, when our pride, our greed, our gain is touched too far,
Is shed, and stands uncovered, what we are?

Show me your light, O God
That I may fight for peace with peace
And not with war;
To prove my love with love,
And hate no more!

Thanks for that Ken ... obviously there is a gift for writing that is in your family. I've been reading Flyboys by the same author as Flags of Our Fathers ... it seems those guys were a different breed. Although who knows, if we had been faced with similar situations we might have been surprised how God would have enabled us to respond similarly.

Thanks Terry. I think you're right. Ordinary people are capable of a great deal in such situations. Perhaps it's b/c they're motivated to fight for each other - for their friends in the ranks. A great book that really illustrates how ordinary people in peacetime can be amazing heroes in a war is VIMY by Pierre Berton. An inspiring read!