A Divine Appointment amidst the Sewage (church bulletin cover) 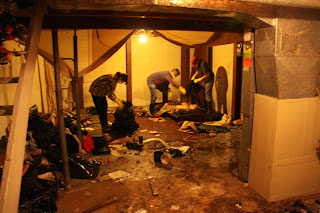 Eighty out of 100 of the units at a Manitoba Housing complex had recently had their basements flooded with at least 12 inches of sewage-polluted water.  As I checked the basement of a single-mom whose social worker had called Gateway Church asking if we could help get the sewage-soaked stuff out of her basement, the smell was unbearable.  I quickly got back up the stairs and told her I'd let her know.

Once I'd confirmed enough volunteers to do the job, I called to tell her that we would do it.  When we arrived the next evening, I found a sign on her door saying she was at the complex's community centre, so I went to look for her.  The centre was full of life and conversation as people crowded into a room to enjoy a dinner graciously provided by ladies from Calvary Temple.  And there she was with a plate of food in hand, grinning when she saw we'd arrived.  She quickly stepped out to open up her house to us.  But as I followed behind her, another lady called out to ask, "Could you clean up my basement to?"  I had no idea how long the first basement would take, so I simply asked for her name and address and said I'd let her know.

It was clear from the start that we had a big job on our hands as we donned our face masks, rubber gloves and gumboots and headed downstairs.  The smell was overpowering, but as we picked away at the dripping clothes, the soggy boxes and the crumbling particle board, we encouraged one another in the work!  Occasionally Ron would shout something like, "This is what we were made for!"  The camaraderie grew as the work progressed, and after about an hour, the job was done.  There were smiles all around as the masks came off, and the biggest smile was that of the mom we had just helped as she thanked us.

But what of the other basement we'd been asked about?  We checked it out before deciding, but of course, we agreed to do it and went back at it!  And it was soon clear that this resident was finding the losses from this flood very hard.  It became apparent why as we began carrying up items that reminded the mother living there of a 25-year old daughter who had died of cancer only two years earlier.  There were pictures on hard drives that may have been damaged, and tears were welling up in the eyes of both the mom and her other daughter at the thought of losing those memories, as well as other special items that had to be thrown away.

Once that second basement was finished, we asked if we could pray for the mom and daughter.  And as Mary prayed, the mom broke down and sobbed as the pain of what she'd been through came to the surface.  But the gratitude she expressed to us, as she hugged each of us, her eyes still wet with tears, clearly revelaed how much Mary's prayer had comforted and touched her heart.  And to think of the "chance" way we met her while looking for the first lady in that noisy, crowded hall.

You could think of this as a pretty smelly and messy way to love Winnipeg.  But amidst all the sewage and the losses, the Lord had singled out a broken-hearted mom who needed His love, led us to her, and helped us to express His love and comfort to her and her daughter.  God is good.  And He loves Winnipeg -- each and every one of us.  And the smell of sewage won't even keep Him away!

Email ThisBlogThis!Share to TwitterShare to FacebookShare to Pinterest
Labels: God's love, reaching out