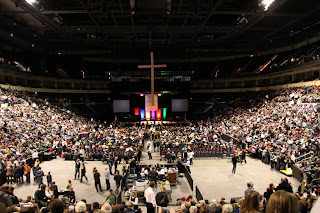 This morning, over 50 churches in Winnipeg closed their doors for one Sunday so that we could all worship Jesus together in one place, at Winnipeg's MTS Centre. It was estimated that 12,800 people were in attendance! And at the center of it all, hanging high above the chairs that filled the floor area was a huge 24-foot cross.

As the worship began, there was so much to capture my attention. The thousands of voices singing passionately to Jesus was such an inspiring expression of devotion and unity. But as I sang from my chair and casually turned to look up at the cross hanging high above the crowd, I had an unexpected emotional response that brought tears to my eyes. I suddenly felt as though I was at Golgotha, the hill on which Jesus died, looking up at the cross on which Jesus was crucified.

There was a crowd around the cross at that time too. They too had to look up to see the cross as it was placed high atop a hill. Some in that crowd were looking up in confusion, and others with compassion, while others in mocking derision. But Jesus willingly gave Himself to hang high above them all, humiliated before them and yet eager to save them. And for a brief moment, I felt as though I was there amongst the onlookers, staring up at the cross of Jesus, wondering at the magnitude of it all, and tears rose up in my eyes. I couldn't help but think, He put Himself on that cross for me. What a scene that must have been.

Today, on January 9, 2011, the crowd around the cross I saw was of a different sort. We were united in our response of praise and gratitude to Jesus who died to save us. For today was no crucifixion scene. Today was a celebration of the exaltation of the One who hung there on a cross so long ago, and who has now been exalted to the throne above every throne!

But for a brief moment, I saw Him there, high up on a cross. And His love for me seemed as clear to me as it has ever been.

We're studying chapter 5 of Revelation today in Sunday School. Your emotion at the MTS center there reminded me of the following scene,

Revelation 5:4 and I began to weep loudly because no one was found worthy to open the scroll or to look into it. 5 And one of the elders said to me, "Weep no more; behold, the Lion of the tribe of Judah, the Root of David, has conquered, so that he can open the scroll and its seven seals."

6 And between the throne and the four living creatures and among the elders I saw a Lamb standing, as though it had been slain, with seven horns and with seven eyes, which are the seven spirits of God sent out into all the earth. 7 And he went and took the scroll from the right hand of him who was seated on the throne. 8 And when he had taken the scroll, the four living creatures and the twenty-four elders fell down before the Lamb, each holding a harp, and golden bowls full of incense, which are the prayers of the saints. 9 And they sang a new song, saying,

"Worthy are you to take the scroll and to open its seals,
for you were slain, and by your blood you ransomed people for God
from every tribe and language and people and nation, 10 and you have made them a kingdom and priests to our God, and they shall reign on the earth."