A lesson even Dirty Harry knew...

I've already admitted that God spoke to me from one of Arnie's Terminator movies, as well as from Sly in one of the Rocky movies, so why wouldn't He be able to from Clint Eastwood as Dirty Harry? It was just the other day, as I flicked on the TV and caught the last 20 minutes or so of Magnum Force, that I heard Clint growl a line that left me wondering if God had me in His sights.

It was a simple line, and one that I at first dismissed even though I couldn't help but feel provoked by it. Take a listen to this brief clip...

I don't know about you, but I often can't resist comparing myself to others in my line of work only to be left feeling discouraged at how inadequate I perceive myself to be compared to how amazing they seem to be! It's like I believe that, in order to feel truly adequate or acceptable, I have to be as good as whoever I'm tempted to compare myself to at whatever they do well at. And since I know some very gifted pastors, that can leave me feeling pretty useless at times! And not only useless, but exhausted as well after wasting time trying to excel at things that aren't my areas of strength. Of course, it also reflects a definite lack of humility as I try to be some kind of Superman rather than celebrating the diversity of strengths within the team of pastors around me.

So that's why I think it's important to heed Harry Callahan's advice in the above video. And that's why I also think that Paul wrote in Romans 12:3-4, "For by the grace given to me, I say to everyone among you not to think of himself more highly than he ought to think, but to think with sober judgment, each according to the measure of faith that God has assigned. Having gifts that differ according to the grace given to us, let us use them..."

We all have a unique measure of faith and grace, and each of us has a different spiritual gift mix according to that grace. That means that we need one another as each of us brings our strengths to help with things in areas in which some of us feel weak. And that means we can appreciate each person's contribution, unthreatened by how much better others are at things we don't do so well.

After all, as much as God calls us to believe Him to do miracles through us, the only way to avoid the petty jealousies that can arise as God uses specific people to do those miracles, is to get to know our limitations – and to be grateful that others have the strengths to make up for them.

I'm so taken aback, I don't know what to say. Maybe I should keep my mouth shut (or my keyboard silent). After all, who am I to judge? I have my own excesses (to a degree). For instance, I buy a smoothie about once every six months. But when a friend of mine came back from a trip talking about a store he couldn't believe existed, I was -- well, taken aback. And however generous the people are who might frequent this store, I still can't manage to accept its appropriateness. As far as I'm concerned, it's a symbol of why some people in this world suffer without adequate food and water while others party. It's a picture of the excesses of western materialism while western newspapers tabulate how many children are dying in the horn of Africa.

I'm speaking of doll spas. American Girl doll spas. Where parents can take their little girls to have their $100 doll's hair done, or their doll's nails done, or their doll's ears pierced. Here's what else is available: "Our stylists will give her doll a thorough facial scrub to get her clean. And to keep her feeling relaxed, we'll send her home with a pampering set featuring cucumber stickers for her eyes, nail decals, flip-flops, a salon cape, and a faux face mask." And that's not all. There are photo sessions for dolls. And you can take your child and her dolly out for a dining experience as well.


So while bony little black children line up for a pot of porridgy food in some arid refugee camp, we use the extra dollars in our wallets to take our child's toy doll to the spa.

No, I'm under no naive illusion that all the world's poverty problems will simply go away if we send all our discretionary income to relief organizations. Corruption, power struggles and vested interests often get in the way. But I also know that the more we spend on ourselves and our toys, and the less we share with others, the less people will be helped as well. 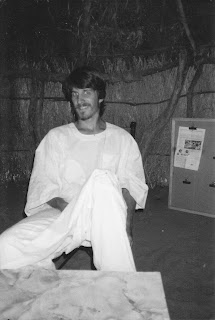 I recently discovered some dusty old journals in my crawlspace. They're from 24 years ago, from when I lived in a remote desert village in northern Sudan, doing community development work. Curious, I began to read them, and before I knew it, I was hooked. I read them all, and what I found surprised me. I have long spoken of my year in Sudan in very positive terms, but what I found in these journals didn't match up with the residual memories I had of that time. The journals were full of appalling reminders of long forgotten challenges and failures -- in my circumstances, but more so in my heart-responses to them. And then I found an old prayer letter that I had sent to my prayer supporters that was so honest that (as I recall) my prayer letter coordinator almost didn't send it out. But it needed to go out. And it still seems a helpful reminder for me. Here it is, if you'd care to read it...

My dear supporters,
How shall I begin? I sit here writing on the edge of a cliff. An emotional precipice. Shall I conceal from you the danger I'm in? Shall I write only to leave vaguely pleasing images in your minds of my disconcerting circumstances so as not to upset your respective days? Or shall I write with honesty, revealing the darkness of the mood I find myself in? Forget the half-truths; I need to share my real feelings. Devotions aren't always good and poor circumstances can become extremely weighty when God's not considered as a part of them. I'm tired. Emotionally, spiritually and socially. I'm tired of team life and the constant effort and super-sensitivity it requires. I'm tired of the expectations placed on me to visit by the people in this community when I have nothing of any fibre to say in conversation in their language. I'm tired of waiting for a drilling rig that I'm responsible to oversee when I know nothing of what its fully experienced crew can obviously do without me. I'm tired of keeping busy with whatever needs doing until communities I'm involved with are able to do what is expected of them so that I can then offer our resultant help. The other projects progress while my projects are delayed. I'm tired folks. I wanna come home. Enough Lord. The furnace is hot enough.

THUS SAITH THE LORD...
"My child! What causes this turmoil in your heart? You have asked me to break you of pride; to soften your heart; to help you to grow mature. Surely you didn't expect such things to be painless, easy, or even fully enjoyable. Ken, I love you. I know that this hurts. But Ken, I have heard your prayers -- your pleading for maturity; your hunger for humility -- and I am only now seeking to answer them. Don't allow the troubles which are now in your life to cause you to despair. I am the God of Abraham, of Moses, of David, and I am your God also. Trust in Me. The troubles are to stretch you and strengthen you. They must not come between us, for I want to be with you to help you with these troubles. You must learn to rest in Me amidst the troubles that life in this troubled world always seems to contain, rather than to try to gain control of the problems by your own power. This is humility -- to admit full reliance on Me because of a recognition of your own inadequacy. You must learn to see Me amidst life's many troubles rather than ignoring My omnipotent sovereignty when life's difficulties begin to hurt. This is maturity -- to abandon earthly shortsightedness in order to realize an invisible and infinitely wise and powerful God's presence with you at all times. Be still, and know that I am God. I love you, and am with you now, as always."