Jesus wants to Change our Focus 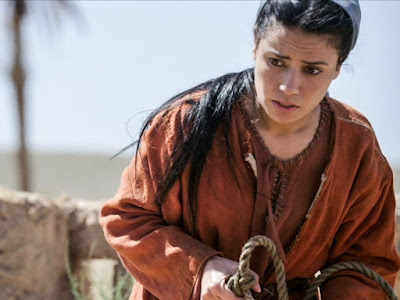 Jesus was on his way home, and choosing to take the quick route, was passing through the region of Samaria. This was the land of the Samaritans, a people despised by Jews, half-breeds due to the Jewish people intermingling with Gentiles long ago when Israel’s northern kingdom was conquered. We’re told Jesus was weary. Imagine that. The Son of God, weary from a journey, feeling thirsty as he rested by a well, unsheltered from the glaring sun. (John 4:3-6)

As he waited there alone, I can see his gentle eyes watching a woman as she slowly approached from the city nearby. It was noon, the hottest time of the day, and perhaps this woman came to the well at this time because she preferred to be alone. Perhaps the struggles of her life had caused her to withdraw from the more social times of day when the well was a busy place, a happy place, a talkative place. And yet here was this stranger, this man resting by the well when she came to draw water. What was he doing here? She likely felt awkward as he watched her self-consciously approach and as she let down her waterpot. I can see him kindly watching her face as she studiously tried to avoid glancing at his. After all, she wanted to be alone. (John 4:7-8)

Then breaking the silence, he spoke, asking for a drink from her Samaritan waterpot. She knew from his clothes, and from his accent, that he was a Jew. And she being both a Samaritan and a woman, knew that this was an inappropriate situation. Why was he addressing her? And why would he be prepared to drink from her container? So she attempted a protest, suggesting how uncomfortable she felt: “How is it that you, being a Jew, ask a drink from me, a Samaritan woman?” (John 4:7-9)

Jesus’ answer couldn’t have been what she expected. It felt a deflection. In fact, it felt like an offer of some kind. He said, “If you knew the gift of God, and who it is who says to you, ‘Give me a drink,’ you would have asked him, and he would have given you living water.” Suddenly it sounded like he didn’t want a drink at all, but wanted to give her a drink! Perplexed amidst the awkwardness of the situation, she asked him where he planned to get this “living water.” Was he suggesting that he knew of a water source better than this well that dated all the way back to Jacob? (John 4:10-12)

Jesus didn’t back down. In fact, I can see him leaning forward eagerly, a slight smile on his face, as he told this lonely woman that the water he had to offer would quench her thirst forever, and lead to “everlasting life”! But she missed his point, immediately latching onto the thought of never having to come to this well again; never having to avoid the cheerful, carefree women who came here in the cooler times of day; never having to be seen coming here alone, after they had left, the merciless sun beating down on her rejected, unworthy frame. “Sir, give me this water, that I may not thirst, nor come here to draw!” (John 4:13-15)

It was then that Jesus truly shocked her. He sat back and gently said, “Go, call your husband, and come here.” I doubt she would have been able to hide the expression of alarm on her face as she quickly looked back down at the well, desperately wondering why he asked her that. I suspect there was then a long pause, with the hot wind blowing across her brow, before she quietly confessed, “I have no husband.” (John 4:16-17)

Jesus must have felt something quite tender toward her as he witnessed this awkward response, and softly yet knowingly replied, "You have well said, 'I have no husband,' for you have had five husbands, and the one whom you now have is not your husband; in that you spoke truly." He knew all along. This would've been another shock to her. And yet, perhaps Jesus exposed those awkward truths just to heighten this woman's sense of desperation. (John 4:17-18)

But this would not have been an easy moment for this broken woman. Jesus had just exposed her sin and triggered her shame. I can easily imagine another long pause here as this woman wondered who this strange man was. First of all he speaks to me while we’re out here all alone by the well, asking me for water – then he offers me water from I don’t know where that can quench my thirst forever – and then he tells me all the things I ever did!

Suddenly she looks back up at Jesus as she blurts out, “Sir, I perceive you are a prophet!” Now she feels frightened, for the prophets of old never treated sin lightly, and this man knows all about her sinful past! So as she fiddled with the rope of her waterpot, once again studiously avoiding Jesus’ gaze, I wonder if she suddenly brought up a religious subject just to shift the subject from herself. Or perhaps the reason she asked about how her people worship at a nearby mountain was to make herself appear less unworthy. Whatever her reasons, Jesus wasn't bothered, and by the end of the conversation, he had said something that we’re told he tried to keep a secret in just about every other place he ever went! Jesus said to her, "I who speak to you am He" – the Messiah. (John 4:19-20, 26)

What a moment! What a dramatic declaration. Jesus, who later said that his Father had sent him to the Jews first, chose to reveal his true identity for the very first time to a woman of the despised Samaritans! But this was not just an Samaritan woman. This was a sinful Samaritan woman who was living with a man in an immoral relationship! But this was not just a sinful woman – she was also a rejected woman who had been divorced by five previous husbands, discarded by them, unloved, unwanted. And Jesus lovingly revealed to her that he was the Messiah, the Saviour of the world! (John 4:42)

What an encouragement it is when we take our eyes off of ourselves and fix our gaze on Jesus! This woman surely felt shame, but Jesus still invited her near by declaring to her who he is. The issue wasn't how worthy she was to know him – none of us will ever be good enough to know God. The point of the good news of Jesus is that it is Jesus who is good enough to be a righteous substitute for us before God, and to show us our worth by taking the penalty of our sin upon himself so that we can be forgiven.

This is why Martyn Lloyd-Jones wrote, "Forget yourself, forget all about yourself. Of course you are not good enough, you never will be good enough. The Christian way of salvation tells you this, that it does not matter what you have been, it does not matter what you have done... this is the test, that you acknowledge readily and say clearly that you look to Christ and to Christ alone and to nothing and no one else, that you stop looking at particular sins and particular people." That was Jesus' message to the Samaritan woman he so lovingly revealed himself to, and it's Jesus' message to you and me today: I am he – and I want to be a fountain of living water in you, "springing up into everlasting life!" (John 4:10, 14)