The Call before the Calm 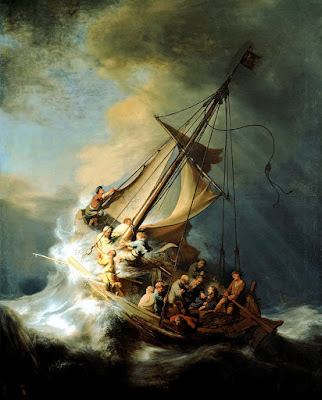 We all know what it’s like to feel exhausted. But have we ever been so weary that we’re able to sleep through a storm while in an open boat with drenching waves sweeping over it?
That’s how tired Jesus was as he wearily climbed into a boat with his disciples and told them to sail to the other side of the lake. Though he had the power to heal, his body also felt fatigue. The Son of God fully experienced our frailty as a man.
I can just see him crawling to the back of the boat where there was a ragged fishy-smelling cushion of sorts, and curling up with it in the space he could find amidst the folded nets and coiled ropes. He may have been asleep before the sails were even raised.
We don’t know how long it was before the storm hit, but we know it was fierce. Mark tells us that “waves were breaking into the boat, so that the boat was already filling” (Mk. 4:37). Matthew tells us that the boat was “being swamped by the waves” (Mt. 8:24). And Luke tells us that they “were in danger” (Lk. 8:23)!
As the winds began to roar, the waves would’ve grown until the boat was being tossed upon them and drenched under them. There would’ve been shouting from the disciples as they hurriedly lowered the sails, and started to bail. And through it all, Jesus slept.
None of the commotion woke Jesus. I can just see the disciples scrambling and jostling to stay afloat, wiping the sea spray of the pounding waves from their faces, and occasionally stealing glances at Jesus, wondering how he could sleep through it all. Perhaps Peter shouted to Andrew or to John, “Should we wake him?”
As they shook him awake, they shouted above the tumult, “Master, don’t you care? We’re perishing here in this terrible storm!” Picture Jesus struggling to focus on their faces as he stirred from a deep sleep, his face wet with spray, and then looked around at the storm that was assaulting them, then back into their eyes with greater clarity in his gaze.
Of the three accounts of this story, I like Matthew’s best due to one small way in which he specifies the sequence of events. In all three accounts, Jesus questions the disciples’ lack of faith, but it’s only in Matthew’s account that we’re told that Jesus asks them this amidst the tumult, before calming the storm (Mt. 8:26).
I love imagining Jesus sitting there, shouting to be heard above such a fearsome storm — “Why are you so afraid? Where’s your faith?” — while waves crashed into the reeling vessel, and as some of the disciples still bailed with all their might. I can picture Jesus’ wet hair whipping in the wind, his eyes squinting in the lashing spray as he looked into the eyes of his disciples’ tired and fearful faces. Then he called on them to believe while the winds wailed.
Their fearful response was obvious, but Jesus didn’t respond to their fear by refusing to help them. As they tried to deal with the storm by their own desperate devices, he didn’t tell them that if they don’t have faith, they’ll see no miracles. Jesus is not a punitive Saviour.
Matthew wrote, “Then he rose” (Mt. 8:26), and majestically turned from the doubtful disciples to the defiant winds and raging waves and said, “‘Peace! Be still!’ And the wind ceased, and there was a great calm” (Mk. 4:39).
The bailing suddenly stopped as flabbergasted disciples stared out at the suddenly placid sea. There was no more shouting as the wind no longer roared in their ears. The winds had obeyed him. The undercurrents of the sea obeyed him. “Who is this?” the disciples asked one another in hushed tones. “Even winds and sea obey him!” (Mt. 8:27).
Fast-forward to the boats of our lives today, and Jesus still calls his followers to trust him amidst the troubles of this world. And I’m so relieved that he doesn’t wait for us to be pure in faith before acting on our behalf. As winds lash at my face, I can be sure that Jesus is with me and has all authority to calm the storms in my life even as he calls me to believe him while I’m still in the midst of the storms.