Let's be clear about one thing: God has piles of grace available. Piles of it. Make no mistake -- there's no risk of Him running short of it. The Apostle John wrote, "And of His fullness we have all received, and grace for grace" (John 1:16). That last phrase could be translated literally as, we have received "grace piled upon grace"!

This thread runs throughout the New Testament -- a great theme emphasizing a great gift of which we are all utterly undeserving, but which God lavishes on His children without calculation!

Abounding and abundant riches of grace revealing God's glory and justifying sinners, and providing hope and help to us all! Grace piled upon grace for all of us to enjoy!

But may we never become so enamoured with the warm sunshine of God's grace that we fail to marvel at the glorious Star of Heaven that is its source. Those piles and piles of grace were poured out from the absolute fullness of Jesus, of which John reminds us we have all received and can enjoy -- each and every day, no matter what our circumstances!

So if grace is all about God's favour being available to us regardless of our merits, and it's available to us in such extravagant abundance -- literally piled into our laps and lives -- why would we ever again doubt the love of Jesus, the infinite source of infinite grace?

What do you do when a big-time need gets worse and worse as you pray for years and years? Is there ever a time to stop asking God about it? Is it possible that God wants the fact that He hasn't answered "Yes" to such prayers to be understood as a "No" and that we should should stop asking Him further about it?

My short answer to that is: there sometimes are such times, but each person needs the Holy Spirit to make that very clear to them.

My longer answer is: the only verses in the Bible that I can think of in which someone is told to stop praying is God telling Jeremiah not to pray for a people whom God had already decided to judge for their sins (Jeremiah 7:16; 11:14). In those cases, God knew that His fatherly discipline was what was clearly needed in the situation and there was no point praying for an alternative approach. God made that very clear to Jeremiah (see short answer above).

But it's a big Bible, and I can't see that happening anywhere else in Scripture. What I see more of is God's call to keep on praying and to not give up!

I see Jesus saying, "Keep on asking for something to be given and it shall be given to you" (Matthew 7:7, Kenneth Wuest's "Expanded Translation").

I see Paul saying, "Pray without ceasing" (1 Thessalonians 5:17). And I see Paul giving us a wonderful glimpse in Colossians of his convictions regarding persistent prayer.

The overwhelming message of the Bible is that we must not give up asking, even if an answer is slow in coming. In fact, Jesus went out of His way to make sure that we knew what to do when answers didn't come quickly. Luke tells us that "He spoke a parable to them, that men always ought to pray and not lose heart" (Luke 18:1) and then proceeded to tell them a story about a widow who had to persist in prayer because an answer was slow in coming. Jesus was basically warning us, as if to say, "This happens sometimes, so don't give up when it does."

So until I get a clear word from God telling me otherwise, I've got to persist! No matter how I feel about the delays or the circumstances, I've got no other option except to pray and keep on praying when answers don't come. Giving up is not an option.

"And shall God not avenge His own elect who cry out day and night to Him?" (Luke 18:7). That's something we can count on.

Learning When to Look

You've probably heard of the silly portrayal of how dogs are so easily distracted by things they see -- a portrayal often imitated when people are making fun of someone who can't focus?

I can be like that. And sometimes it's not so funny. Like when I see things that aren't wholesome to look at, or that cause my heart to covet, or that cause me to lose heart because I end up focused on something sad.

There are two instances about two inches apart on a page in my Bible in which people lift their eyes and look at something. And in one case it's a good thing, and in the other case it turns out not so good. And only today did I appreciate a lesson to be learned from the contrast.

In Genesis 13:10 it says, "And Lot lifted his eyes and saw all the plain of Jordan, that it was well watered everywhere (before the LORD destroyed Sodom and Gomorrah) like the garden of the LORD, like the land of Egypt as you go toward Zoar." Then four verses later, it says, "And the LORD said to Abram, after Lot had separated from him: 'Lift your eyes now and look from the place where you are -- northward, southward, eastward, and westward'" (13:14).

I'm intrigued by the fact that Lot may have looked at things prematurely -- before looking to the LORD -- to identify what would be best for him from his own limited perspective. But Abraham seems to have waited until the Lord spoke to him before he looked closely at what was around him.

F.B. Meyer writes, "Abraham lifted up his eyes, not to discern what would best make for his material interests, but to behold what God had prepared for him. How much better it is to keep the eye steadfastly fastened on God till He says to us! -- 'Lift up now thine eyes, and look...'"

I'm so easily distracted from the great big God I love to follow, that I'm like that dog, except that I'm more likely to suddenly say "Trouble!" instead of "Squirrel!" But now I hear God telling me to look at Him before I look at things around me. He wants me to first gaze at Him, waiting until He tells me to lift my eyes and look, because He knows I'll find it difficult seeing some of the things around me without His help.

And then when I lift my eyes and look, I'll see with the eyes of faith that come when one has been given divine perspective. I'll see things with hope and trust, because what I see will be combined with what God has spoken to me when my gaze was fixed on Him.

Walking blind. It's good for me.

When we get out of bed each day, we really don't have a clue, do we? We may think we do, but when we really think about it, how sure can we be of what's going to happen each day? Yeah, we've got plans, but do we really know all that's going to come our way between waking up and hitting the hay? But even though certainty in circumstances is an illusion, we can walk each day with confidence when we know that God is leading the way. I think of this as walking blind. I don't know what's coming, but God does, and He has me by the hand.

Abraham understood this when God told him to get up and go to an unknown land that God would show him (Genesis 12:1). I love F.B. Meyer's almost poetic description of Abraham's response: "Whither he went, he knew not; it was enough for him to know that he went with God. He leant not so much upon the promise as upon the Promiser: he looked not on the difficulties of his lot -- but on the King eternal, immortal, invisible, the only wise God; who had deigned to appoint his course, and would certainly vindicate Himself." 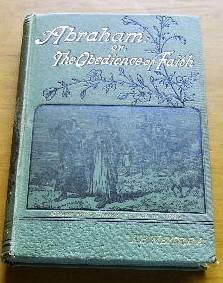 Every morning, God calls us to get up and enter an unknown day. Where today will take me I don't know for sure, but it's enough to know that God is with me, that He loves me and has everything under control. It's enough to know that God is good and wants to guide me through each day. I just need to let Him as I pay attention to Him in every room I enter and on every road I travel.

Walking blind takes faith, but if we choose to do so, God will lead us to yet unknown destinations we will only reach by trusting Him; exciting God-destinations that we will only get to with God leading the way. "Ah, glorious faith!" writes F.B. Meyer, "this is thy work, these are thy possibilities! – contentment to sail with sealed orders, because of unwavering confidence in the love and wisdom of the Lord High Admiral"!