Happy Birthday to my Dad! 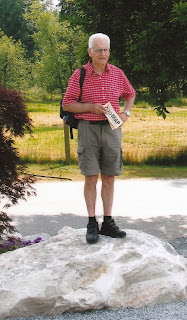 My dad turned 75 today. Three-quarters of a century and going strong. It makes me feel like the son of a patriarch when I put it that way. In fact, I'm as proud of my dad as if he were a patriarch. He's a godly example to both his kids and his grandkids. He loves Jesus and loves to live for Him.

I didn't always get along that great with my dad, but somewhere along the way, I grew up enough to appreciate him. And somewhere along the way, he met Jesus in a way that changed him forever. I don't mean changed all at once into some perfect guy. I mean continually changing -- growing in God year after year -- and still growing now! He's become an example to me in how he shares the love of Jesus with his friends. He's an example to me in his incredible generosity to his family. He's a challenge to me in how he stands up for what he believes is right.

And despite my reluctance to listen to a word he said in those crazy childhood and adolescent days, my dad somehow managed to impart many valuable lessons to me that are still a help to me today. Though I didn't even realize it at the time, his values were shaping mine, becoming a part of who I grew up to be, and I'll always be grateful for that.

Simple things. Like I still remember the day he taught a little boy named Kenny how to sweep a garage floor without creating a cloud of dust. "Keep the broom nice and close to the floor after you push," he instructed me. Sure enough, that kept the dust down.

Insightful things. Like when he sent me downstairs to get a tool, and I came back saying it was too high for me to reach. Though I was quite young when this happened, I still remember his response: "If that had been a candy I'd sent you down for, you'd have found a way to reach it!" As he went downstairs to get his tool, I sat there guiltily thinking how right he was!

Personal things. I can recall how he helped me to face up to how prone I was to being defensive (as I still can be). He'd overheard me talking with some friends and later told me privately how unfriendly I sounded due to how defensive I'd been with them. As he walked away, I remember thinking about defensive players in football and wondering how on earth I was behaving like them. It was somewhat later when I finally realized what he'd meant!

Deeply meaningful things. As long as I remember earning money in jobs outside our home, which I began to do when I was about 10 or 11, I remember tithing. I don't remember my Dad teaching me about tithing, but I do remember that he tithed. I don't even know how I know that he did. He must have told me. But however he communicated that value to me, it led me to want to follow his example, and it's been a reflex ever since. And I'm sure that it's the main reason why God has blessed me in the area of provision as much as He has to this day. Check out Malachi 3:10 if you don't believe me.

God has given us His teachings "which He commanded our fathers to teach to their children, that the next generation might know them, the children yet unborn, and arise and tell them to their children, so that they should set their hope in God and not forget the works of God, but keep His commandments" (Psalm 78:5-7).

My Dad and I may not have always gotten along in those early days, but I still looked to him for many cues and learned many good things from him. I'm especially thankful that he raised me to know God and to follow God, and that I can now teach my children to do the same. And now, as he turns 75 today, I truly consider him a friend and thank him for his influence on my life as the patriarch of the Peters clan.