I was walking home from Mark Hock's house, who lived just three houses down my street.  I think we were about five or six years old, and in those days, Mark and I spent many sunny summer days on our driveways racing Hot Wheels around imaginary cities.  Those Michigan summers of the late sixties/early seventies were all about having fun for us, and whether we were climbing trees, riding bikes, splashing in a pool or playing with toy dinosaurs on a porch, we had a lotta fun.

But as I headed home that day (could've been for lunch, I don't recall), I was distracted before I even got past the first house between Mark's and mine.  I could see a man I didn't recognize banging a hammer in the Mills' backyard, so I went to investigate.  I watched him for a bit before he acknowledged me.  He seemed friendly enough as he greeted me, and after about as much chit chat as any man-on-the-job would care to have with an unexpected little neighbourhood kid, he asked me to fetch him a bag of nails from the back of his truck out on the street.  I recall feeling both eager to help and flattered to be asked by this important workman, and ran with my little boy legs down that long driveway to his truck.  I stared at all the stuff in it, scanning, scanning for the desired nails.  I grabbed a small brown paper bag that seemed to match the description he had given me and ran back, hoping it was the right nails. 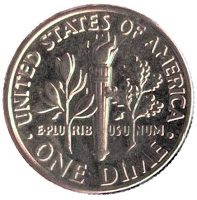 They seemed to be, for he received them happily.  And then something amazing happened.  He told me to stretch out my hand, and he placed one thin dime onto my palm.  I'm quite certain that my mouth must have been hanging open.  A whole ten cents!  Aside from my allowance from my parents, this was the first money I had ever received working for someone.  I don't even recall if I thanked him.  I hope I did!  I just remember my wide-eyed excitement at being given a dime for a job well done.  I clutched it in my fist as I ran home to show my mom and tell her the news:  I had just earned ten cents for fetching nails for a workman!

It was a great feeling.  That little dime made a lasting impression on me, and I'm quite sure that that carpenter had no idea how much his kindness impacted a little boy.

Email ThisBlogThis!Share to TwitterShare to FacebookShare to Pinterest
Labels: childhood